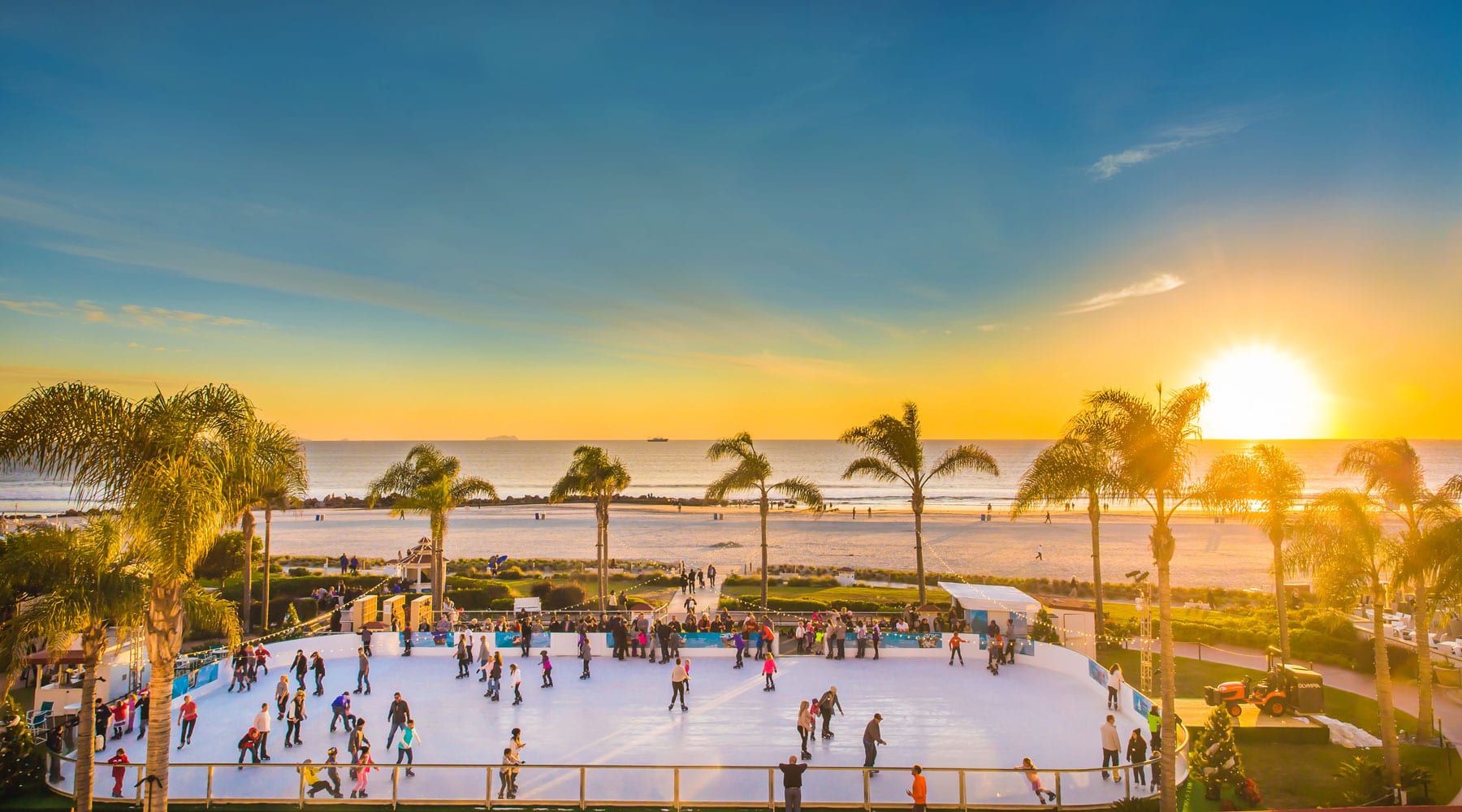 By ilovesandiegoNovember 5, 2019November 10th, 2019Beaches, Coronado, Coronado | To Do, Downtown, Gaslamp, Gaslamp | To Do, San Diego Neighborhoods, To Do | Featured
No Comments

It may not feel like winter, but that won’t stop us from doing all sorts of festive things! Even if you haven’t decked out your home in holiday garb yet, it may be wise to plan ahead and add a few quintessential San Diego winter events to your calendar.

Skating by the Sea ® at Hotel Del Coronado

Hit the ice with an ocean view – not bad, right?! Proceeds from the ice rink, open November 22 through January 5, go to Make-A-Wish San Diego. And since this the Hotel Del does nothing less than extraordinary, this year you can reserve your own private rinkside lounge. Four to six people can cozy up around a fire pit at Frostbite – A Place To Chill, with seasonal sips and snacks while you watch the skaters. Frostbite reservations start at $150 – which sounds steep, but split between four people, that’s a good deal! It’s a fun way to feel festive even if you don’t want to lace up skates.

Kids of all ages will love this Encinitas activity, and adults will adore it too! The San Diego Botanic Garden will feature face painting, crafts, a scavenger hunt, play area with real snow, visits with Santa and a Snow Princess, and more during their annual Botanic Wonderland event. Wander the garden with a hot chocolate in hand while exploring the twinkling light tunnel, mistletoe hideaway and more gardenscapes. Enjoy food trucks, a mulled wine garden, and holiday shopping bazaar at this family-friendly event, open most nights during December. We recommend getting there around 3 p.m. to beat traffic and see the gardens during the day and night – the sun will set between 4 and 5 that time of year.

Once the sun goes down, the zoo lights up! From December 13 to January 5, the San Diego Zoo says Jambo to Jungle Bells with decorations, live entertainment, and too many lights for us to count. This year the zoo is unveiling an elusive new….performance? Experience? We’re not sure what to call it, but Aurora is a light and sound show that we bet kids will love. The zoo will also have extended winter hours for exploring after dark. Our tip: aim to visit during sunset when the animals may be more active. While nocturnal critters will be up and about at night, many others may be snoozing. Even so, it’s pretty cool to walk around the zoo with less of a crowd and lots of lights.

During the first weekend in December, the city changes. Event the biggest grinches get into the holiday spirit. Because the first Friday and Saturday in December, Balboa Park transforms into San Diego’s most popular event of the entire year. (Read: IT’S A BIG DEAL.) December Nights has been known to draw over 300,000 people to Balboa Park, which becomes packed with live music, performances, and local artisans all under a blanket of twinkling lights and holiday decor. The highlights of this free event are debatable, but we love that the Balboa Park museums are open with free admission from 5-9 p.m. both nights, and the International Cottages serving food and drinks from around the world. You probably guessed this, but parking is a nightmare. Just hop in a rideshare and wear shoes you can walk in!

There’s just something about a manicure...it makes us feel like we have our life together. Treat yourself to a little pampering and polish at one of San Diego’s best nail salons. Read on for some local favorites!
Alexa Brynne
Normal HeightsNormal Heights | To DoNorth ParkNorth Park | To DoSan Diego NeighborhoodsSouth ParkSouth Park | To DoTo Do | Featured
March 7, 2022

Where to Score Sweet Vintage Clothing in San Diego

There’s something exciting about shopping for vintage goods. It might be the thrill of the hunt for that one special piece you can’t find anywhere else, or discovering a relic that’s back in style. Read on for a few of…
Alexa Brynne
BreakfastCentralCoffeeCuisineDessertDowntownDowntownEat & Drink | FeaturedEat and DrinkGaslampGaslamp | Eat and DrinkHillcrestHillcrest | Eat and DrinkLocationNorth ParkNorth Park | Eat and DrinkSan Diego Neighborhoods
July 26, 2021

There’s just something about these fluffy, fried treats that make people willing to wait in line for them. Stick to the classics or give your taste buds a brand new treat at some of San Diego’s most deluxe donut shops.
Alexa Brynne
Share Tweet Share Pin

Feeling Hungry?Discover the BEST food & drinks around you.

Explore curated lists of top restaurants, cafes, pubs, and bars around you, based on the latest trends.

We use cookies to ensure that we give you the best experience on our website. If you agree to our use of cookies, please close this message and continue to use this site.Accept